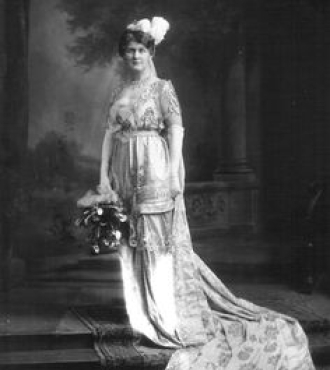 Famed author, Willa Cather, wrote the inscription for the dedicatory tablet in memory of Evelene Brodstone Vestey's mother, Mathilde Brodstone: “She brought across the seas high courage, a warm heart, a rich relish of life, and a hand skilled and untiring in those domestic arts that give richness and beauty and reality to daily living. In later life she traveled far, but her heart was here, and all her journeys brought her home.”

Evelene Brodstone who later became Lady Evelyn Vestey passed away in London, May 23, 1941. Her heart was always in Superior, Nebraska, so requested that she be buried there. Evelene Brodstone rose from a $12 a week stenographer to the world’s highest paid women executive before she became the bride of Lord William Vestey, the wealthiest man in Great Britain. Evelene spent more time away from Superior than she actually lived there, but returned as often as possible. She retired twice, moved to what she considered home, and was called back to London to help with the business.

In memory of her mother, who passed away in 1924, Evelene and her brother, Lewis, gave the city land and the funds to build a hospital. Brodstone Memorial Hospital opened its doors on January 2, 1928. There is also a Vestey family trust fund of which the hospital benefits annually. Why a hospital? She also gave Superior two blocks as a bird sanctuary and children's park. But why a hospital? Was it because her father passed away when she was 5 years old? Was it because she was in London when her mother passed away? We do not know the answer, however through her foresight, the fruits of her generosity continue to benefit the Superior area today.

As a woman in business she insisted the bylaws be written such that there would be 6 board members to govern the hospital and stipulated they be women. In later years, it was difficult to recruit women for the board, so the bylaws were modified to allow up to two men.

Evelene leaves a legacy of hard work, a great business sense and the desire to take care of people. The hospital continues this legacy today. Over the years there have been many changes, remodeling projects, additions and equipment purchases to continue being the great asset that began years ago. How do we measure our success? At a time when some hospitals are closing because of financial difficulties, Brodstone Healthcare continues to grow and expand. Eleven times Brodstone has been named as a top 100 critical access hospital in the nation. Other honors include being named a CMS Double 5 Star award winner, recognized as the NOSORH Nebraska Community Star and named among the nation’s top 27 patient recommended hospitals. The hospital continues to bring more specialty providers to the facility for expanded offerings to meet the needs of the area. Brodstone is the largest employer in the county and continues to grow the skilled, educated staff, with over 200 dedicated employees. In 2022, Brodstone Memorial Hospital
was rebranded to Brodstone Healthcare.

The City of Superior celebrates the Victorian Festival every year during Memorial Day Weekend. During this festive time, the leadership and staff of Brodstone Healthcare also reflects, with gratitude, on the legacy that Evelyn Brodstone Vestey left our community.

Willa Cather wrote the lines to appear on the inscription plate at the hospital, “The Brodstone Memorial Hospital given to the city of Superior in 1927 by Lewis and Evelene in loving memory of their mother Mathilde Emelie Brodstone who was born in Christiania, Norway in 1847 and died in Superior 1924.” And this is certainly a gift that gives well into the next century.